This is where picking a single song to represent a year starts to get tricky. 1991 wasn’t where everything changed for me, but it’s a time defined by discoveries, some more exciting than others. By far the most obvious choice to represent this year would be R.E.M.; I fell in love with Losing My Religion and Out of Time, and spent most of the rest of the year in awed obsession, hoovering up their entire back catalogue while I waited for the remarkable, incredible Automatic for the People to be released.

1991 was a time of looking in all directions before choosing a road. One day in September I bought three albums that summed up my search: On Every Street by Dire Straits, Into the Great Wide Open by Tom Petty & The Heartbreakers, and Leisure by Blur. Something old, something something, something new. Which musical path to take? In the end I chose the road less travelled. Perhaps just to get a way from the banality of life, perhaps to show what a remarkable thinking iconoclast I was, or perhaps because 1991 was the year pop finally gave up and stopped trying to keep me interested.”

It was a year of greatest hits, re-issues, novelties, musicals: didn’t anyone care any more? Bryan Adams was number one for the whole of the summer (just you keep your British weather jokes to yourself, all right?) and for a while it looked like he would steal Autumn from us too. 16 weeks at the top - who was out there buying (Everything I do) I do it for You after four months? “Well, it’s just been such a busy summer, I haven’t had time…”

It took the release of U2’s first single in over two years, The Fly, to bring interesting back, but then suddenly Vic Reeves and The Wonder Stuff were number one with Dizzy, completing a hat-trick of chart-topping comedians for the year after The Simpsons (Do The Bartman, 3 weeks) and Hale & Pace (The Stonk, 1 week). The bestselling singles of 1991 also included Any Dream Will Do, It’s in His Kiss (The Shoop Shoop song), and I’m Too Sexy. After Freddie Mercury’s death in November, Bohemian Rhapsody was re-released and became the year’s second biggest selling single. 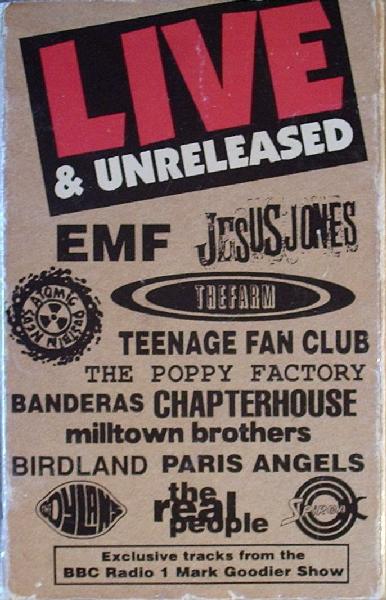 As Queen were on the verge of topping both the album and singles charts at the end of 1991, the latest issue of Vox magazine was published. Attached to that December 1991 issue was a free cassette - Live and Unreleased - featuring 14 exclusive tracks from the BBC Radio 1 Mark Goodier show. Alongside less remembered names like The Dylans, Milltown Brothers, Paris Angels and Spirea X, the last track on the tape was a stunning version of Everything Flows, a track from Teenage Fanclub’s first album, A Catholic Education. In contrast to the relatively leaden album version, it rips along, and Raymond McGinley’s guitar solos (if you can call them that) are note perfect.

Teenage Fanclub’s second album, Bandwagonesque, was released in November 1991, and although it hasn’t been representative of the band’s sound for a long time, it is still what I think of first when I hear their name. At this time the back pages of Melody Maker and NME were your passport to a world of gig listings, extra-special import albums, and all the band merchandise you could possibly, conceivably lust after. Basically, t-shirts and posters, really. You sent off your postal order and within mere weeks a cardboard tube would find its way to you containing, say, album artwork from the latest Tom Petty release, or a stupidly big image of Michael Stipe’s shadowed, downcast face from the cover of Losing My Religion. Or even a Teenage Fanclub Bandwagonesque tour poster, the only disappointing aspect of which is the thought that Geffen apparently paid Gene Simmons because of a trademark he held in the image of a moneybag with a dollar sign on it.

It’s an album that is proud to show off its influences, in particular Alex Chilton and Big Star, and if that makes it in any way regressive or unoriginal, well, frankly who cares? It starts with the opening three-part masterpiece The Concept (I’d give anything for this to be as well known as Bohemian Rhapsody), and finishes with the instrumental Is This Music?, which I seem to recall soundtracking the Goal of the Month competition on Match of the Day for a while. Between these two you’ll find various flavours of perfection: Alcoholiday is all glam stomp and harmonies, and I Don’t Know contains a guitar line that will never be bettered. Seriously, stop trying, put down your instruments, this game’s been won already.

Then there’s What You Do To Me. A second shy of two minutes, it’s short, sweet, and succulent - “I know, I can’t believe / there’s something about you got me down on my knees” - and if I once heard it compared to Status Quo, I’ll just attribute that to the fact that the accuser (a known Bryan Adams fan) must have had them on his mind after watching them accept their Outstanding Contribution to Music Award at the Brits that year.

Star Sign is perhaps the best example of their slacker rhythm and combined guitars. It’s essentially Big Star with long hair (incidentally the name of a Teenage Fanclub track from the b-side of The Concept that shares some common DNA with Star Sign) and a sudden and surprisingly easy-going approach to life. with a lyric offering a casual dismissal of superstitious beliefs and behaviours

After Bandwagonesque came the weedier Thirteen, cut from more transparent cloth but sporting much the same pattern. Grand Prix hinted at what a comfortable-again Teenage Fanclub were capable of, and with Songs From Northern Britain they once again proved themselves masters of melody and harmony. All of these albums have spawned great singles, only one of which, somewhat surprisingly, made the Top 20 (Ain’t That Enough reached #17 in 1997).

To some, 1991 was all about Nevermind. Spin magazine famously chose Bandwagonesque as its number one album for the year, though, and even as they try to backtrack from that bold decision and engage in some retrospective herd-following, it’s worth remembering that they didn’t even have Nevermind in second place that year. It was actually third, behind Out of Time. Personally I’m impressed they got the order so spot on first time.

« The Charlatans - Sproston Green The House of Love - Feel »