The radio plays the sounds we made

And everything seems to feel just right

So sang Richard Ashcroft on The Verve’s song A New Decade, released in, er… 1995.

A new decade: a time of excitement, anticipation of what might be. But also a time of looking back. Thinking of what might have been. “They’re selling hippy wigs in Woolworths” lamented Danny as his decade of fug reached a close at the end of Withnail & I.

Madchester was looking good in the late 80s. In the city that had already served up a generous helping of seminal 80s indie - Joy Division, New Order, The Smiths, The Happy Mondays, The Stone Roses - everyone was high on… I dunno I was too young for all that, and anyway with my customary timing didn’t get to the party until it was down to its last bulb… but high on something, let’s say. No matter how underground you start, get high enough and someone will notice. Clubs started closing, authorities starting taking dim views, and didn’t like what they found in murky corners. By the mid-90s, a Conservative government clinging, terrified, to the precipice of power (a MORI poll in August had them 33 points behind Labour), brought in the “Turn that racket down, don’t you lot have homes to go to?” act, which effectively banned young people from cheering themselves up with illegal highs and “sounds wholly or predominantly characterised by the emission of a succession of repetitive beats” (aka rave).””

The Charlatans - probably the best Manchester band not to actually come from Manchester - had released three albums by mid 1994. The run started with Some Friendly, which went straight in at number one in the album chart. The pressure, or the glory, or something must have gone to their heads by the time they went back into the studio to record its follow-up, the mostly mediocre Between 10th and 11th, but partial redemption came in the form of 1994’s Up to Our Hips.

Two tracks from Some Friendly found their way onto two 1990 compilation albums of very different quality, both of which found their way into my music collection. Let’s get the less good of the two out of the way first.

The Hit Pack was a 1990 compilation album that moves from the sublime to the utterly ridiculous in 24 chart hits. 24 because I bought the luxury cassette version with its extra tracks, and not the CD version, which was limited to 21. It starts promisingly: Deee-Lite’s Groove is in the Heart takes Herbie Hancock’s Bring Down the Birds and makes popsicles out of its bass riff. It’s largely a downhill journey from there, with everyone’s second favourite Black Box track, Fantasy, and everyone’s second favourite SNAP! track, Mary Had a Little Boy starting the ride. 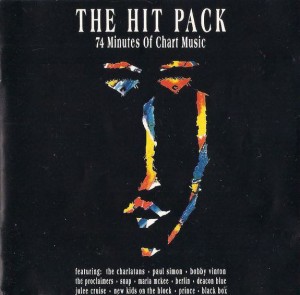 The Hit Pack meanders around for the rest of its tracklisting without settling on any genre. I say meanders, but the transition from 808 State (Cubik) to Aztec Camera (Good Morning Britain) is not as bucolic as all that, while following Show Me Heaven by Maria McKee with Berlin’s Take My Breath Away is as much of a transition as a non-committal step forward in quicksand. The standout track was Then by The Charlatans, with its baggy backbeat and Tim Burgess singing just outside the intelligible range of my tin ear for lyrics (the opening line is “I want to bomb your submarines”, apparently).

The worst is saved for last, however, with the unspeakably dismal Fog on the Tyne (revisited) by Gazza & Lindisfarne. 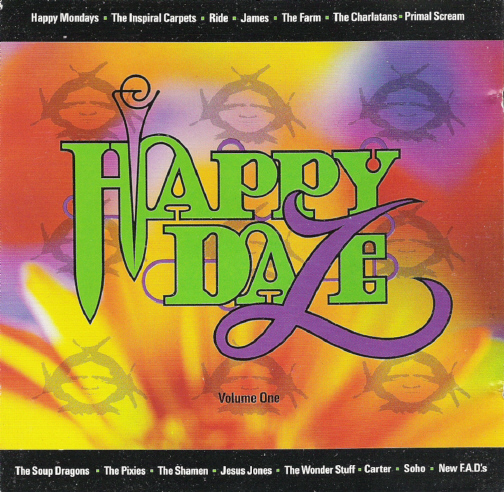 We feel it sums up the year the Indie Guitar Pop finally left the bedroom, hooked up with some strident dance grooves and had one hell of a bender / night out!

Not a bad summation. Apart from the curious selection of Hippy Chick by Soho, and the inclusion of a remix of Circle Square by The Wonder Stuff, it is for the most part a solidly danceable indie-dance collection. At the time it was my introduction to Carter The Unstoppable Sex Machine (Sheriff Fatman), Ride (Taste), and the splendidly named New Fast Automatic Daffodils (Big). The Charlatans track on offer was The Only One I Know, which lifted lyrics from The Byrds’ Everybody’s Been Burned and swirled them around in a big baggy Hammond organ soup, with a strong bassline for a ladle.

I Know I’m Too Necessary

Sproston Green is the last track on Some Friendly, and was said to be lead singer Tim Burgess’ favourite Charlatans song at the time. It’s the kind of song that sits up and begs to be played at a neighbour or parent-offending volume, and that’s generally how I listened to it. It’s one long groove driven by sustained chords and that insistent Hammond. Or, in the words Ian Gittins of The Guardian, it is “leaden psychedelia”. Listen to either the album version here, or the live version back up at the top of this page, and make your own mind up.